The Niagara Gorge is one of the most beautiful, and over-looked, aspects of the Niagara region. The gorge was created by the progress of Niagara falls as it literally cut this huge canyon out of stone at a very rapid pace (geologically speaking). Each step downstream takes you 100 years into the past.

As I mention briefly in the clips below, I spent a lot of time in the gorge as an adolescent. We used to camp on the shore of the Niagara Whirlpool. These wilderness adventures had less to do with taking in the vista and more to do with under-age drinking and carrying on. C'est la vie.

I tried to cut these scenes into a more comprehensive film but the resulting epic was too large to post onto Youtube. As a result I have picked the best clips and have pasted them below.

Before we get started, let me address the soon to be obvious elephant in the gorge (as it were) - my hair. Please forgive me if I decline to discuss how my hair became that shocking Blorange color, and merely reassure you that it was fixed shortly thereafter. Done and done. Enjoy!

Posted by Rage-A-Mus Prime at 2:11 PM No comments:

The first thing I do, whenever I return home to Niagara, is take a long bath. This serves to wash the plane smell off of me and there's nothing quite as satisfying as sinking into a hot, steaming tub. Even in July.

The next thing I do, most of the year, is head out to sit by the pond next to the patio in my parents' backyard. There is something about the lilies, goldfish and birds chirping that re-energizes me. I love it. Here is a quick film I made of the many, many frogs hanging out in the pond (there are actually many more in the movie than I even realized while filming) and then a quick interaction with nature Ian and I had in Niagara Falls later on in the afternoon. Enjoy!

Thank You for Being a Friend 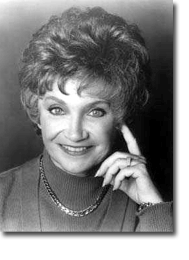 Like many 'mos, the Golden Girls played a large part in my formative years. There was something so inspiring about four older women - who by all accounts were no longer relevant in society (and certainly not in Hollywood) - who were ballsy, brash and completely comfortable in their own skin.

The boys and I used to play Golden Girl trivia during the long drive to and from Toronto. My favorite question, "What was Dorothy's nickname in high school?" (If you know the answer, enter it in the comment section below). While Dorothy was always my favorite character, it was her interactions with her mother, Sofia, (played by the incomparable Estelle Getty) that left me laughing until tears rolled down my cheeks.

Miss Getty passed away this morning at her home in California. She had been suffering from dementia for the past few years which made it impossible to join her cast mates in appearances like this year's TV Land awards. I am just so grateful that she has left behind a legacy of laughter. After all, what is more divine?
Posted by Rage-A-Mus Prime at 10:00 AM No comments:

The Bitch is Back!!!

The new spin-off of Beverly Hills 90210, "90210" should have all of the things I love in a TV show. Fashion, melodrama and a decent soundtrack but, after seeing the leaked pitch reel online, I think I may not be able to stomach it.

First off, the clothes are approaching California cliche - they look like the cast-offs from the OC season 2 wrap party and the actors have absolutely nothing interesting to say about their characters. All in all, I would say that the show warrants a pass - and yet today... something changed my mind. 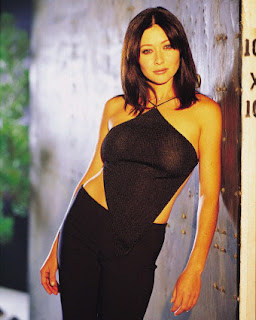 According to the AP, Shannen Doherty is going to be reprising her role as Brenda Walsh over multiple episodes when 90210 premieres September 2nd on the CW. Apparently, Brenda is now a very famous director who is going to be overseeing a high school play at her old alma mater and... I can WAIT! I love me some Shannen D. I loved her in the original - "Never talk to me again!" - , I loved her on Charmed, I even watched her show (on Lifetime? Oxygen?) where she helped people break up with their loser partners. Full disclosure - I think she's Divine.

The new cast has already stirred the pot (with CW producers rubbing their hands together with conspiratorial glee) speculating that Shannen and Jennie Garth (also reprising her role) will have some sort of on-set smack down like they did back in the old days. I seriously doubt that it could happen, because I believe deeply that Shannen has grown as a person and would never behave that way, and also because - let's face it - Ms. Doherty could use the gig.

If you're planning on giving the new show a pass - I don't blame you - but rest assured, I will take a bullet for the team, watch the premiere and report back. I am the first to admit that a little Shannen goes a long way, but I totally up for the ride.
Posted by Rage-A-Mus Prime at 10:36 AM No comments:

Irony is All The Rage

By now I'm sure you've all heard about the flap regarding the cover of this week's New Yorker magazine. It features a satirical (take note of the word, satirical) image of Senator Obama, and his charming wife, Michelle, in the oval office dressed in Muslim gear and as a para-military assassin, respectively. To their right, in the fireplace, burns an American flag. They are smiling at each other while doing the infamous fist bump.

To my eyes, this satirical cover is no more, or less, offensive them the one, a few months ago, of Obama and Clinton (in bed together) both reaching for the phone as it rings at 3am. The New Yorker has always had a penchant for poking fun at the hypocrisy of politics and the media and, in this case, did a remarkably good job of it.

Since Obama became the presumptive Democratic party nominee the right wing of the Republican party and their media partners (FOX News, The New York Post, talk radio, et al) have moved very quickly to create a sense of unease amongst the working class about Senator Obama and his wife. Everything from relentlessly parsing Mrs. Obama's comment that for the first time in her adult life she is really proud of her country to using the Senator's full name - Barrack Hussein Obama - whenever possible, to FOX News commentators discussing whether or not the fist bump is a terrorist signal - I am not making this up.

The fact that anyone takes the rantings of the uber conservative talking heads seriously is absurd to me, but such is the state of American politics that there is a small, but rabid, faction of the population that takes it very, very seriously. It is the very absurdity of the right wing that prompted this cover. 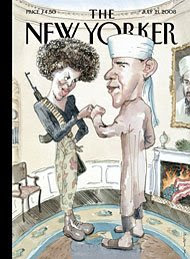 What I find truly insane is that the Obama camp have reacted with pompous political outrage. First off, if they hadn't led such credence to the "offensive" cover it would have simply disappeared - instead they chose to fan the flames. This "controversy" offered Senator Obama the perfect opportunity to address the cover, and the ridiculous rumors which prompted it. Why his campaign manager chose to go on the offensive while Senator Obama himself, refused to comment at all seems rather odd to me.

Following a week in which Obama allowed his children to be interviewed by Access Hollywood, and then made the rounds of the morning talk shows to lament the decision and assure the media that they would have no further access to his children - as though the original interview hadn't been orchestrated by his campaign, with his blessing, makes me wonder who is actually steering this ship.

As this campaign advances there is a greater sense that the Illinois Senator is remarkable thin-skinned, especially as he takes every opportunity lately to respond to any slight - large or small - real or imagined - levied against him. There is a real danger, if he does not pick and choose his battles, that he will continue to be pulled into these media inventions masquerading as "controversies" and the right wing will have gotten exactly what they want - the opportunity to set the tone of the campaign and the very real possibility of painting Barrack Obama as an angry black man.

My advice to Senator Obama and his campaign generals would be to pick their battles carefully, and consider every possible outcome. Fighting a war on too many fronts is a losing proposition - just ask Geroge W. Bush.
Posted by Rage-A-Mus Prime at 1:06 PM 1 comment:

Friday night we (being Joey B, Vix and myself) decided to stay home and force the world to come to us. How did we accomplish this? We set a trap with Cranium as the bait. We managed to rope in Jason Fab and a couple of Vix's friends - Ryan & Caroline.

Due to my tendency to be very (though charmingly) competitive Joey B has a long standing rule where he will not be on my team. As a result, I played the first game partnered with Vix and the second with Jason Fab. I won the first and lost the second (in a dismal third place finish). Regardless of the outcomes, we had an amazing time.

On one particular turn, Joey B created the fabulous sculpture below. If you think you know what the answer is, enter your guess in the comment section below. The correct answer will win two $30 gift certificate to Blue Jean bar in Chicago. (click photo to enlarge) 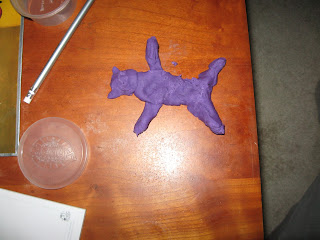 After our guest made their way home, there was the craziest storm yet here in the Midwest. There was psychotic thunder and lightening and, following a particularly bright strike and a window shaking roll of thunder, Vix and I looked at each other and just knew that lightening had struck in the neighborhood. Once the worst of the storm had passed, we headed out into the street to determine what damage had been done. This is what we found: 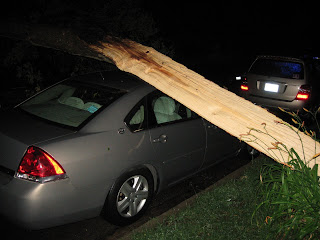 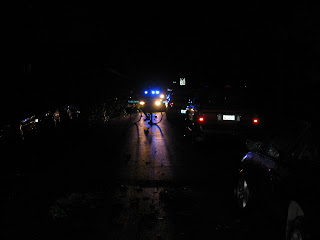 This tree was struck by lightening, split into three pieces and fell across Wilson ave. It was really
cool, though I did feel really, really bad for the owner of the grey sedan. Afterwards, Vix and I walked to the bridge over the Chicago river and watched the fireflies and the moon reflected in the water. Then we made our way home and listened to music on Vix's laptop by candlelight until the power came back on. 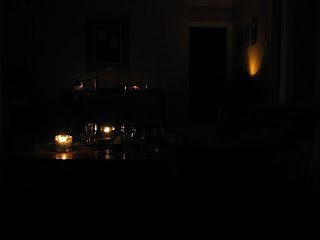 It's amazing how candlelight totally changes the way your home looks and feels. I totally recommend trying it for yourself - the storm and power failure are, of course, optional.
Posted by Rage-A-Mus Prime at 10:49 PM 1 comment: