I just discovered this hilarious site (thanks Melis!) all about the corporate world, which I happen to occupy.

Until recently, I was a Project Manager (I am now a Digital Producer). Even still, I found this particular strip hilarious. The title is "Project Manager", check it out: 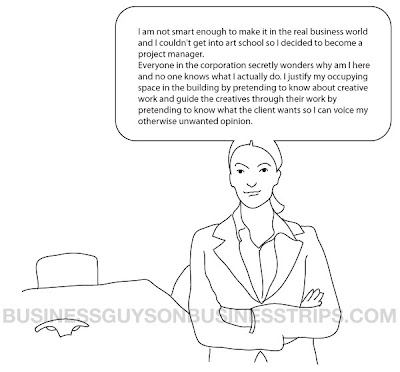 Posted by Rage-A-Mus Prime at 1:43 PM No comments:

The Return of Gossip Girl

Here is a sneak peek at the new season of Gossip Girl.

I have to admit that last season lost some of it's luster for me, but I'm hoping that the new season will offer a fresh start. Especially because the new campaign is called WTF??? If I'm not yelling WTF at my TV during the season premiere, I will be deeply disappointed.

Are you excited for the new season?

I was horrified to read this morning about a police chase that ended with a collision - killing 8 people.

I think the blame lies in 2 camps.

Firstly, there is a reason that every time you hear a story like this, it has happened in California. This state has manages to turn high speed chases into Colosseum entertainment. They interrupt programming to bring you a car chase, day or night, with commentary by overly tanned anchors.

The public interest in high-speed chases aren't just confined to California. You can see programming on Fox and many "male centered" cable channels dedicated to the "craziest chases and crashes" in America. California, however, is the only place I can think of that will scramble the news copters at the first report over the police scanner that someone refused to stop when being pulled over for a minor speeding and /or moving violation. Get him, boys!

Secondly, I blame the right-wing backlash against people of hispanic descent - these nazi-esque rants can be heard all over the radio and every nutbag with a computer is free to blame all of their problems on "the illegals". I have a sneaking suspicion that there is a chance that the driver of the Dodge Neon (that refused to stop) was being driven by people who were possibly living in this country illegally. The fact that they chose to drive at high speeds through central California, resulting in the fatal crash, denotes that they had panicked and felt that they had to escape the police.

This is not to absolve the adults who, once they chose to drive off did not secure the very, very young children in the car with seat belts, causing them to be ejected upon impact. Only to say that "fight or flight" is a strong physical, as well as psychological, response to a perceived threat. The question is why we always must give chase - and if the punishment can in any way fit the crime.
Posted by Rage-A-Mus Prime at 10:27 AM No comments: