Internationally renowned comedian and ukulele player, Ben Lerman, (who just happens to be a friend of mine) just posted a video defending Captain "I don't know what to do without my foot in my mouth" Imus. Truly brilliant - see for yourselves:

Our House is currently on the market which means that I have to keep it in tip top shape. On a regular basis I have to vacuum and Joey B and I stay on top of the dishes at all times. It really doesn't take too much time but, like everything I do, I have taken it to an extreme. I have become obsessed (Joey B would say to an annoying degree) with keeping the house spotless. I realized it had gome too far this morning when I suffered a bout of what I will call "Paul Gravelle" syndrome - I was on my hands and knees polishing the floor in my bedroom. Yes, this is not a typo. I hand-polished my floor with orange oil at eight o'clock in the morning. Medical intervention may be necessary.

Moving on. I figured since many of you have not yet had the opportunity to visit my fair pied-de-terre I would do a quick tour so you can feel like you have. As I was editing I realized that I included some pretty crazy pans (it's not the Blair Witch project, but nausea may be experienced!) I left out the basement as well, which isn't much to look at but IS clean, clean, clean.

Posted by Rage-A-Mus Prime at 3:32 PM No comments:

Labels: Joey B, Our House, Soleil

Today I attended a "Design District" event hosted by Domino Magazine in Lincoln Park, featuring free ice cream, huge discounts and gift bags from Bloomindale's. My idea of heaven. Following that I met up with Joe O and crew for brunch at Joe's Brick House. The amazing thing about this brunch is that it's an all you can eat ,emu (which changes - allegedly - every weekend) and drinks are only a dollar! Dangerous.

After brunch we headed to Boystown, for more drunken (though rather tame) debauchery. At Roscoe's we met this really funny couple, Deb (there celebrating her birthday) and Val. They were hilarious, and of course they fell in love with Joe O hardcore. He has the magic touch. 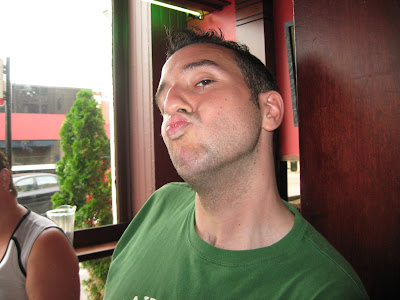 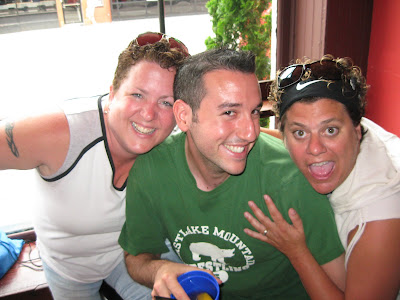 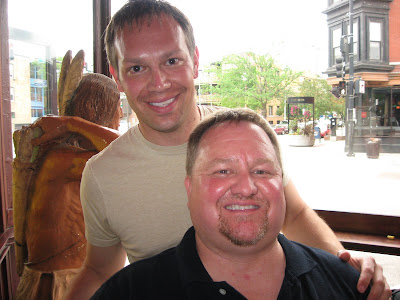 Jeremy & friend
It was a great day, and it was so nice to hang with Joe - we don't get to see each other that much anymore but every time we do, it's like old times.

SLIMMING UPDATE: I have lost 6 pounds so far, even despite brunch. Yeah!!!
Posted by Rage-A-Mus Prime at 11:54 AM No comments: