Melis just sent me this hilarious (though unintentionally so) ad by Microsoft for their new "SongSmith" program. Take a look as the "happily" married Ad man comes out in song...

Posted by Rage-A-Mus Prime at 2:22 PM No comments:

The Pot and the Kettle may be Black...

... but Ann Coulter will tell you that's the fault of Hollywood liberals. During her short appearance on The View yesterday, she managed to call Alisha Keyes, Halle Berry and Barack Obama race baiters, accuse single mothers of destroying society and attack Barbara Walters for reading excertps from her book as though it was written by Adolf Hitler.

Normally my policy with nuts like Coulter is to ignore them, but I think that this, the latest appearance of a woman I call Intolerance Barbie, is something everyone should see.

WHICH married-with-children cable TV honcho has been so helpful to an ambitious reporter who works for him, everyone thinks they're having an affair - including her boyfriend? Her beau dumped her flat after reading some incriminating e-mails . . . WHICH media mogul has been hitting on the flight attendant on his corporate jet - and her girlfriend? He offered the hotties an all-expenses-paid trip to Mexico City, but they laughingly declined.
Posted by Rage-A-Mus Prime at 11:24 AM No comments:

Last night I was treated to another hour of Momma's Boys. While this week episode was, on the whole, more watchable than episodes past, I did still change the channel a couple of times when things got really intense (always involving Mrs B).

This week we were finally treated to the "show date" where JoJo (Mrs Bs hockey playing 21 year old son) asked an African American woman to go rock climbing. After the date, they retire to a hot tub where they get a little smooch on. Of course, the producers - knowing that Mrs B is... let's say, xenophobic - insists that she be brought to her son immediately. The producers promptly get her to a helicopter and the next thing you know they are hovering above the hot tub while Mrs B (via a telephoto lens) watches her son kissing the "black lady" (her words, not mine).

Here is my problem with this whole sequence. It is all just so convenient and unconvincing. Are we really supposed to believe that this entire thing wasn't staged by the producers. JoJo, dreamy as he is, doesn't seem able to stand up to his mother when it comes to wearing a shirt she doesn't like, let alone dating someone his mother has had serious confrontations with. Secondly, if you have a helicopter hovering above the hot tub you are soaking in - you stop kissing and look up. Lastly, being able to shoot in a residential neighborhood from a helicopter takes time and planning, it's not like grabbing your flip and jumping into the Prius. All I can say is, Ms. Seacrest... pah-lease.

The most cringe inducing moment of the show is when JoJo defends his Mother's behavior on the show by saying that, ALL mothers are like that. He seems a little bewildered when his date disagrees. Later on in the show, he gives his date, Misty, the old heave ho because she "disrespected" his mother and then turns to her and says, "you're more important than she is." Of course your mother is more important than some girl you just met, but dude - grow a pair and call your Mom on her BS.

The other mothers, while having their opinions and making them heard, lack the manic insanity that is Mrs B, much to my relief.

This episode also welcomed the respective religious leaders, and the extended families, of the Momma's Boys over to the mansion to celebrate Hunnukah and Christmas. It was a cute idea, but led to a butting of the heads between Robert and his Mother, Esther - who wants him to marry a nice Jewish girl, only one of whom is left in the house. Robert has his eye on an African American lovely named Camilla, who was very interested in learning all about the ceremonial and culinary traditions of the Festival of Lights. Looks like there's a shiksa in the kitchen with Momma.

At the end of the show each mother and son team were given 3 plane tickets to the US Virgin Islands, for the next step of the competition. The moms had one to give away and their sons, two. For better or for worse, the islands should offer more chances for romance and conflict. Looks like things are about to get ugly in paradise.
Posted by Rage-A-Mus Prime at 10:09 AM No comments:

When you mix Cyndi Lauper, Jennifer Saunders and Graham Norton it's a pretty safe bet that the results will be hilarious.

It's All Pretty in the City

I drenched myself in two back-to-back episodes of, new Whitney Port star vehicle, The City, while staying at my parents place in Niagara over the holidays. Ian, who was in from the UK, watched with what I can only describe as "minimal" interest. 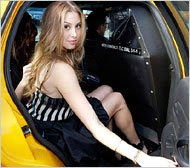 As I have mentioned before, joey B and I - when discussing the new show - have sat on very different sides of the same fence. I was very worried that they were going to turn Whitney into another victim of hormonal urges (ala LC during her run in Laguna Beach and during season 1 of The Hills) who chases "bad for her" guys with the same gusto she uses when shopping for shoes. Lauren, for the record, has learned her lesson the hard way and no longer dates "on camera" except for those guys who are (I'm sure) selected by the shows' producers. Joey B thought Whitney would emerge unscathed.

I'm afraid that my predictions have proved rather accurate. The flavor that Whitney brought to The Hills was not only as a sounding board for "Lauren's Life" exposition (which she did by asking early on in EVERY episode, "so, what did you do this weekend?") but also as the resident career girl. We have watched her manage to stay afloat despite Hillary Duff's late appearance at Teen Vogue's "Young Hollywood" party and the general craziness that is Kelly Cutrone. She fell on National TV while modelling a Hillary Swank Oscar dress, and we loved her all the more for the tears afterwards.

Sadly, the move to NYC has left her with little (apparently) to do professionaly but a lot of time to spend with an Australian Douche Bag named Jay, who has started off strong by sleeping with other girls and lying about it to her face. Jay, as well as Whit's new roommate (and old friend) Erin are meant to represent "downtown" while snide nobody Olivia Palermo is meant to represent uptown. Palermo, as the New York Times so aptly pointed out, is not the Upper East side of, "Brearley and Yale but [rather] of ostentatious dressing and dumb luck." So far, Palermo has managed to embody the mixture of insecurity and entitlement that will always leave her, and her ilk, apart from the Astor set. Regardless, she is a promising villain and I look forward to hating her even more that I did when following her exploits via Page Six.

I'm hoping that this show will allow Whitney to continue with her ambitions and not end up a crying, pathetic mess getting jerked around by a selfish narcissist while the public eats it all up, it should be noted, with anything but a silver spoon.
Posted by Rage-A-Mus Prime at 10:06 AM No comments:

WHICH newly married starlet gave a guy she trysted with a nasty STD right before her wedding . . . WHICH on-the-rocks couple have been headed for divorce for a while? The rock star was cheating on his actress wife immediately after they got hitched and has been carrying on with his comely female sound technician . . . WHICH television actor should ask his new fling for her secret photo album? While she was in college, she took some nude pictures that are floating around the hard drives of local frat houses. Somehow, we don't think the actor will be turned off.
Posted by Rage-A-Mus Prime at 8:19 AM No comments: